Carna Biosciences’ long standing commitment to manufacture highly active protein kinases is based on our belief that drugs designed to inhibit disease related protein dysregulation should be evaluated in activity- based enzyme assays using the most active kinases. Production of protein kinases meeting these standards is not always an easy task. Despite use of stable Escherichia coli or insect cell expression systems, the result can be production of kinases with little or no detectable activity. Here we’ d like to share how Carna produces the high quality kinases on which our reputation is built.

Other kinase family members require complex formation for activity, for example the CDKs, where the kinases must form a complex with a cyclin expressed in a cell cycle-dependent manner for activation. By replicating these natural phenomena as precisely as possible, active recombinant kinases are produced. Below we outline the methods we deploy to produce highly active kinases.

Pre-incubation of kinases with ATP

Many receptor-type tyrosine and other kinases expressed in cells are activated by agonist stimulation. However, isolating membrane proteins from our kinase expression systems is not easy. Instead, we express only the intracellular domain of the receptor tyrosine kinase, then incubate in the presence of ATP to promote autophosphorylation. This results in the kinase being fully phosphorylated and increasing its activity following purification. This method is employed in production of some kinases at Carna.

Use of upstream kinases

Artificial manufacturing of protein kinases comes with a risk of inactivating the kinase activity. In general, Carna preferentially uses a GST tag to express kinases. Given that GST is a 26kDa protein that can dimerize, it’ s difficult to say that this tag has no effect on the activity of the protein. As one solution, we incorporate a PreScission Protease (cytiva) cleavage site in our GST fusion kinases. Excising the GST tag from the protein can increase the activity of some kinases, as shown with our TSSK kinase below as an example (Fig. 3).

GSK3 is an example of a kinase where phosphorylation of certain sites leads to lower rather than greater kinase activity. Specifically, it has been reported that Ser21 (GSK3a) or Ser9 (GSK3b) phosphorylation leads to inactivation of the kinase. By implementing enzymatic treatment with phosphatase, GSK3 activity can be regained (Fig. 4). Utilizing the various approaches and treatments outlined above, in combination with our extensive kinase knowledge and experience, Carna has a long history of producing highly active kinases. We employ an approach optimized for each specific kinase, enabling us to consistently deliver enzymes of superior quality. Each kinase we sell is accompanied with a product information sheet describing the details of the enzyme. Please visit our website or contact us for additional details. Did you know that Carna’ s kinase profiling services exclusively utilize the same high quality kinases we produce in-house?

You want to safe this information? Download as PDF. 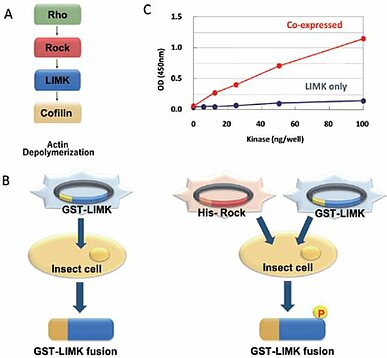 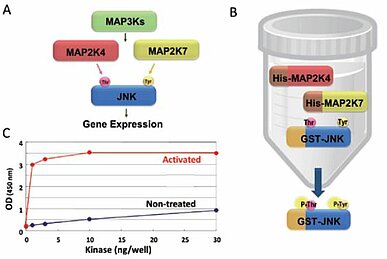 Fig. 2. (A) For maximal activation of JNK, Thr and Tyr of the Thr-Pro-Tyr motif must be phosphorylated by MAP2K4 and MAP2K7. (B) Carna mixes GST-JNK with His-MAP2K4 and His-MAP2K7 then re-purifies GST-JNK. (C) Activity comparison

Fig.4 Kinase Activity regained by treating GST-GSK3 kinase with phosphatase. No phosphatase activity was detected in the final product.