To date, the US FDA has approved more than 50 small molecule kinase inhibitors (1). In general, most kinase inhibitors have low selectivity, attributed to their interactions with the ATP-binding pocket, a highly conserved region among all kinases. Although this low selectivity occasionally induces side effects, it also leads to the possibility of inhibiting multiple kinases using molecules with only slightly different structure, which can accelerate drug development efforts. This also indicates the importance of investigating the interaction between not only the compound and its targeted kinase, but also kinases in the same family, in addition to others associated with different branches of the kinome. Activity-based biochemical assays are highly valuable in this application when investigating the inhibitory activity of compounds against a specific kinase and across the kinome, as they allow for selectivity interrogation and new target identification at low cost and high speed.

Investigating inhibitory activity as well as off-target effects of compounds

For example, crizotinib was initially developed as a c-MET inhibitor, however it was later found to inhibit 13 additional kinases including ALK and RON, as demonstrated in a biochemical assay against a panel of >120 kinases. The biochemical kinase selectivity profile of crizotinib was then shown to be consistent with its pharmacology, with respect to a limited set of kinases with potential clinical utility. These results also provided mechanism-based guidance for the extended use of crizotinib to treat additional specific cancer patient populations (2). As an example, crizotinib received fast-track designation and then was approved in 2011 by the FDA for treatment of ALK-positive non-small-cell lung cancer (NSCLC) patients. This was possible given the EML4-ALK fusion transcript was reported in 6.7% of NSCLC cases (3). Another example is that of imatinib, a lead compound originally identified in a screen for inhibitors of protein kinase C (PKC). During compound optimization, a derivative was found to have inhibitory activity against tyrosine kinases, among them Bcr-Abl, reported to be present in 95% of patients with chronic myelogenous leukemia (CML), and implicated as the cause of this disease. As a result, imatinib was approved in 2001 by the FDA for the treatment of CML and was highly regarded as a paradigm shift in the treatment of CML thereafter (4).

The case is strong for the relevance of biochemical kinase assays, not only when seeking crucial information about potency and off target effects related to the program target, but also as an avenue to identify new and expanded applications of lead compounds and drugs for re-purposing. The NTRC (Netherlands Translational Research Center) published a comprehensive kinase profiling study of FDA approved kinase inhibitors based on data derived from a biochemical assay panel screen utilizing 280 kinase assays offered by our company. They reported two ALK inhibitors (ceritinib and brigatinib), and two CDK4/6 inhibitors (abemaciclib and palbociclib) strongly inhibited CLK1, an important target for Duchenne Muscular Dystrophy (5). This additional example of activity-based biochemical assays yielding information on the inhibitory activity of compounds towards an off-target, demonstrates an exciting means to revalidate previously approved drugs, discontinued drugs, or drugs under development, for potential for new indications. 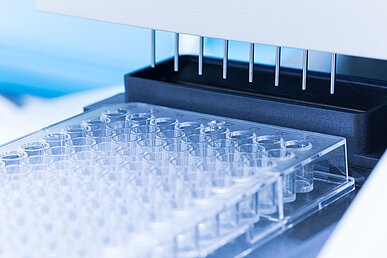