Carna Biosciences’ long standing commitment to manufacture highly active protein kinases is based on our belief that drugs designed to inhibit disease related protein dysregulation should be evaluated in activity- based enzyme assays using the most active kinases. Nearly all kinases produced at Carna are expressed in insect cells, purified, and amino acid sequence-confirmed using peptide mass fingerprinting, however ... One may ask whether it is the expressed Kinase (X) that catalyzes the phosphorylation reaction giving rise to the product, phosphorylated peptide substrate or ADP, in the presence of ATP. Alternatively, is it possibly another kinase derived from the insect cell host system, Kinase (Z)? Also, could ATPase activity be generating ADP in the assay?

Let's assume that the purity of Kinase X is 99% and that the remaining 1% is contributed from Kinase Z. What would happen if Kinase Z has a much higher affinity for ATP and peptide substrate S compared to Kinase X? In that case, the majority of the phosphorylation product may be generated from Kinase Z activity, as opposed to the target kinase, despite the fact that it only represents 1% of the kinase preparation. At the same time, ATPase contamination could affect the detection of kinase activity of interest because of excess ADP production. Is there a way to determine whether the obtained phosphorylation activity is truly from the target kinase?

When an E. coli expression system is utilized to produce a kinase, the result is often a product with no or minimal activity, making the insect cell expression system the more favorable alternative. Carna became aware of the fact that insect cells have their own unique, highly active kinases, which also possess the rather undesirable characteristic of low substrate selectivity. What’ s worse, Carna found that when a His tag is used for kinase purification, the insect cell-derived kinases tend to remain in the preparation, and become inseparable from the kinase of interest after completing the purification. In addition, there are cases where a tyrosine kinase has a strong serine-threonine kinase activity even if it has a purity of 95% or higher (Fig. 2). Based on these observations, Carna has elected to use a GST tag as its first choice when producing kinases. Insect cell-derived kinases have also demonstrated phosphorylation activity, particularly targeting the substrates shown in Table 1.

Additionally, phosphorylation by insect-derived kinases, when detected, gives rise to erroneous data for the target kinase, particularly when using non-specific substrates or when using certain antibodies to a substrate. Let’ s illustrate one example here. Even when a protein kinase was prepared as a GST-kinase to eliminate contamination by insect cell-derived kinase(s), contaminant kinase activity was detected when using anti-phosphorylated threonine-histone H3 antibody with histone H3 as a substrate (Fig. 3). In summary, even if a kinase protein of interest is highly purified, the activity that one detects in experiments may be derived from a kinase other than that of the target kinase. Carna has been reflecting upon each lesson learned from a long production history with our products, and we strive to analyze activity via different approaches to make sure we validate that the activity is coming from the kinase of interest. This way, we can not only ensure that quality of our products, but we also protect the quality of our assay services that utilize these kinases.

Fig1. If a small amount of Kinase Z exists in the preparation of Kinase X, is it possible to confirm that the measured substrate phosphorylation is the result of Kinase X? Additionally, can we establish that the ADP produced is from the target of interest as opposed to an ATPase activity? 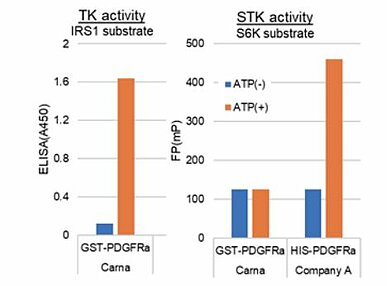 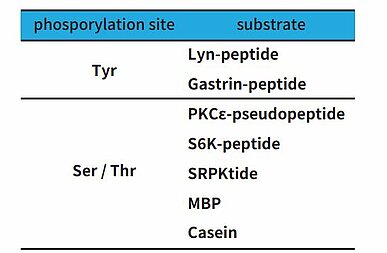 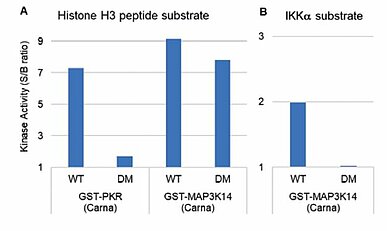