RAF protein kinases (ARAF, BRAF and CRAF) are key components of the RAS-RAF-MEK-ERK signaling cascade. An upstream signal such as from a receptor tyrosine kinase allows RAS to convert to the active GTP-bound form. The GTP-bound RAS binds RAF proteins, inducing RAF dimerization which then activates the downstream MEK-ERK signaling (1) (Fig.1).

There is great interest in BRAF inhibitors, as BRAF is downstream of activated RAS mutants, but also found mutated in 8% of human tumors and particularly in ~60% of melanomas. BRAF [V600E] has been detected in greater than 90% of BRAF-mutant tumors and acts as a monomer, liberated from upstream activation. Three ATP-competitive RAF inhibitors, vemurafenib, dabrafenib and encorafenib, show remarkable clinical efficacy in patients with BRAF [V600E/K] melanoma and received FDA approval for the treatment of this disease. Yet, despite their effectiveness, continuous administration leads to drug resistance and tumor relapse. Moreover, it is reported that vemurafenib and dabrafenib often produce serious side-effects among these, cutaneous squamous cell carcinoma (2). Recent research has revealed that these undesirable events including drug resistance and side-effects are due to ERK activation caused by RAF dimerization, after drug treatment (3).

TypeⅠ1/2 RAF inhibitors (such as vemurafenib, dabrafenib and encorafinib) effectively inhibit the activity of the BRAF V600 mutant monomer but are unable to effectively inhibit the activity of RAF dimer, as the binding of the inhibitor to one monomer of a RAF dimer reduces the affinity of the subsequent inhibitor binding to the other monomer (negative cooperativity) (3). The result of an increase in RAF dimerization is the likely cause of the drug resistance in patients who have continued administration of type Ⅰ1/2 RAF inhibitors. Among the causes of the drug resistance are RAS activation (by RAS mutation or overexpression of the upstream receptor tyrosine kinases) (4), or the expression of splice variants of BRAF [V600E] which can be dimerized independently of RAS activation (5). Additionally, vemurafenib and dabrafenib can induce RAF dimerization, causing post-treatment cutaneous squamous cell carcinomas in BRAF-wildtype cells where RAS is active (so-called, paradoxical activation) (2) (3).

Thus, preventing RAF dimerization is an effective strategy for the development of new, next generation inhibitors with improved safety and durable efficacy, which underlines the value of relevant cell assays that can identifying the dimer formation.

Next-generation RAF inhibitors including typeⅡ pan-RAF inhibitors and paradox-breakers are currently undergoing clinical trials. TypeⅡ pan-RAF inhibitors target both RAF dimers and RAF monomers at similar potencies. However, these inhibitors strongly induce RAF dimerization by locking RAF in αC-helix IN conformation and drive paradoxical activation, although minimally. On the other hand, a paradox-breaker, namely PLX8394, pushes the C-terminal end of the αC-helix in BRAF and CRAF out, thereby perturbing the cross-dimer interactions of BRAF homodimers and BRAF/CRAF heterodimers, resulting in very low levels of paradoxical activation in these inhibitor types (6) (7).

If you are interested in Carna Biosciences’ products & services, including this RAF dimerization assay and ELISA assay kits, please feel welcome to contact us. 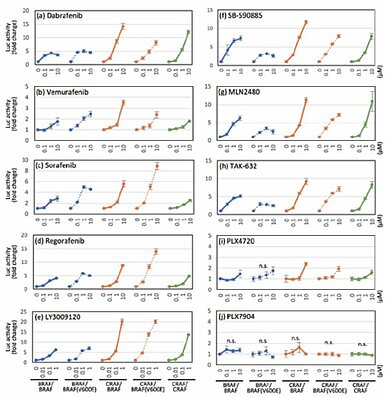